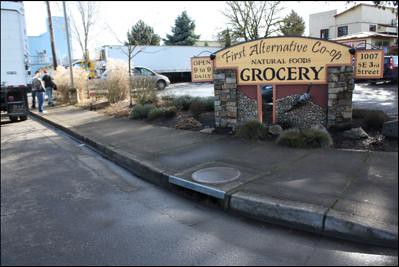 First Alternative Natural Foods Co-op, a Corvallis leader in sustainability practices, has teamed with the Coalition Water Action Team to develop a demonstration project showing the process of development and financial results of more efficient use and discharge of water on-site.

The Co-op was chosen for this project for four reasons:

To demonstrate that a fully developed and operational business can reduce by 50% its use of 3 municipal water systems and maintain productivity.

To reduce use of tap water and discharge of both wastewater & stormwater at the First Alternative Natural Foods Co-op South Store by 50% by July, 2013 and have the Co-op serve as a model demonstration site for water conservation and efficiency in the City and region.

We surveyed department managers about water use and how they can diminish use. We work with staff to change water use behaviors. This technique requires training and monitoring  with no equipment expenses. Financially, this is the easiest technique to incorporate. Following are examples.

Flow Rate – Turn down water flow for each faucet, hose or sprayer use. We rarely need such high flow rate as we use. Reducing flow rates can cut water use by 20-30%.
Flow Time – Turn off water when not using it for short periods. It takes very little effort. Be more efficient and shorten the time to wash something. Cutting flow time on every water use can cut water use and discharge by up to 30%.
Non-Essential Water Use – We often use large amounts water out of habit that are unnecessary – such as cleaning pavement or vehicles. By surveying water use at the Co-op, we discovered instances where substitute techniques could be implemented to reduce or eliminate water use to meet the Co-op’s goals.  Achieving these goals requires behavioral changes. 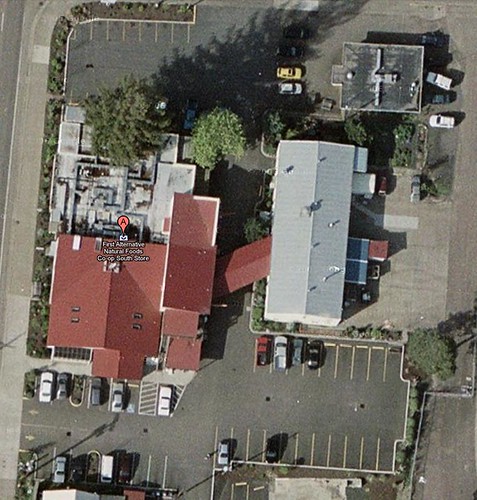 Paving & Building Expansion – Avoid further paving of property or expanding the foot print of buildings over the land. Generally, the more a property is paved or built upon, the more stormwater runs off the property during a rain and into the municipal system. Runoff costs all taxpayers money and leads to further destruction of our streams and rivers. Behavior change is required to stop the habitual drive to pave and build. Through prior owners of the site, areas have been paved when there is no current need for pavement. Buildings and sheds had been added in the past when space could have been used more efficiently. It is more economical to have the first behavioral act as looking for an alternative to paving and building.

Following an in-depth survey of over 50 Co-op tap water sources, we installed water flow meters to determine which sources consumed excess water. We determined which water sources would benefit from low-flow appliances or reducers and which sources needed automatic controls to over-ride excess manual use. We administered a site survey to analyze how stormwater flowed off the property and into the municipal storm drainage pipes. From that data, we developed a plan to reduce and slow down the stormwater runoff. Following are examples.

Low-Flow Inhibitors – Faucets, hoses, sprayers can all be modified for reduced water flow and at higher pressure. Following a survey of flow adapters at the Co-op, the first low-flow was to purchase sprayers that have a lower volume of flow, but at a higher pressure. The result is the same level of force emitted to clean whatever is needed, much with much less water. 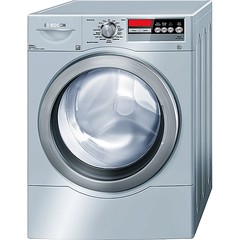 Water Appliances – Electric and gas appliances that use water, such as washing machines and dishwashers often use far too much water than is necessary for the job. Replacing old appliances and toilet with new appliances with efficient Energy Star ratings can cut water use per cycle by 50% or more. New low-flow toilets can also save 20-60% water use over older models. The first appliance to be changed at the Co-op was a washing machine that washes 4 loads, 360 days of the year. Not only is there significant water savings, but reduced electrical use and far less soap is used and discharged into the wastewater system. Toilets and dishwashers are also being replaced. 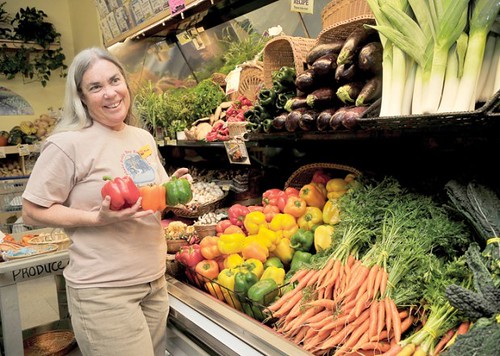 Automatic Water Systems – At the Co-op, a number of water sources are on  automatic systems. Two automatic sources that use a high volume of water are the outdoor landscape irrigation system and the indoor produce display case moisturizing spray system. The automatic systems are not set to the true needs of the water users, but to manufacturer settings. By gradually lengthening the time intervals between spraying and reducing the spray time for each application, the amount of water can be reduced by 50% without negatively impacting the water user. 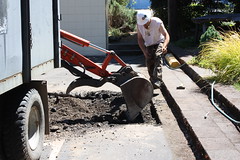 De-Pave Impermeable Surfaces – Most of the Co-op property is covered with pavement and buildings. The site was surveyed and it was determined where paved areas were no longer required. Two sites were de-paved initially as a test. One area will be a meeting and demo area while the second de-paved area will be a rain garden. 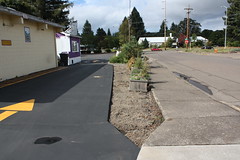 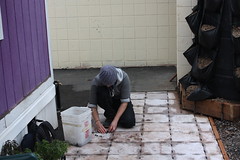 There are many techniques for slowing down and reducing stormwater runoff from fully developed sites. We are using many of these techniques, The picture at the left is a recently de-paved area that later became a raingarden. The raingardens were installed by Al Shay and the OSU School of Horticulture. The picture at the right shows a recently de-paved area which is being re-surfaced with permeable pavers.  The Pavers were installed by Metzger Green Build. Green vegetated roofs and living walls  collect, use and slow down stormwater drainage. 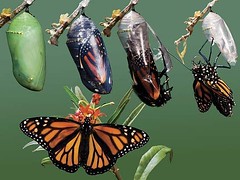 A system change involves changing how a water consuming or draining activity is conducted and creating an alternative process that requires little or no water. System changes start with a survey to prioritize water usage and determine where system change is feasible. The challenge to system change is not financial burden, but the difficulty in challenging the status quo. Two water uses were identified at the Co-op for system change. 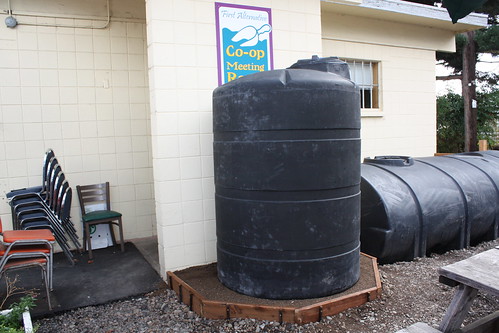 Thousands of gallons of water drain off each rooftop for every inch of rain. Most of the rooftop runoff in Corvallis flows directly into the municipal stormwater piping system. In one-third of the City, the stormwater is mixed with raw sewage and piped to the waterwater treatment plant. Every time it rains, this runoff costs taxpayers significant tax dollars. In two-thirds of the City, the rooftop runoff that goes into the municipal system runs directly and within minutes into our urban streams, scouring the stream channels, flushing out life and depositing harsh pollutants into the aquatic ecosystem. One of the most basic steps a building owner could take to remedy this problem is to install rain tanks that capture the rooftop runoff and later use it for irrigation. With sufficient storage capacity, 50-80% of rainwater drainage from buildings can be captured and re-used. The captured rainwater can then reduce the significant irrigation costs during dry periods. Purchase and installation of the tanks resulted from a partnership with JTi Supply, Green Currents, and the OSU School of Mechanical Engineering.

Human-Powered Water Pumping – Thanks to a Senior Engineering Project by OSU Mechanical Engineering students Bryan Dripps, Michael Henderson and Heather Reinhart, the first two of five human-powered pumps are installed to pump the captured rainwater for irrigation. A bicycle water pump pumps the water from two rain catchment tanks and irrigate a living wall of vegetables draped around one of the tank, a rain garden and fill a 200 gallon tank. Visitors to the Co-op can have fun and get some exercise pumping rainwater onto garden plants or spraying water up from a fountain. This Stormwater Demonstration Area by the South Store Co-op Meeting Room will become both a playground for kids and an outdoor gym for adults.

Every business and most homes drain to the wastewater system thousands of gallons of used, but not polluted water each month that could be re-used for irrigation or toilet flushing. There are strict laws on how greywater can be used. We are exploring how we can incorporate greywater re-use into the Three Water Project.

All wastewater in the municipal area currently flows to one site for treatment. This site lies directly in the Willamette flood plain and has been flooded in recent times. On-site wastewater treatment facilities can be developed that use safe, biological processes from plants and aquatic fauna to treat wastewater. This on-site treatment lowers the dependency and costs of centralized systems and diversifies the risks during environmental or social crises. There are strict laws governing how wastewater can be treated on-site. We are exploring how we can incorporate on-site wastewater treatment into the Three Waters Project. 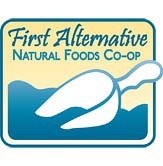 Press Releases As we complete observable construction and application phases at the Co-op, we will provide press releases to the Co-op Thymes, Corvallis Gazette-Times and other local print and digital media. The media will be invited at each completed phase to tour and photograph or video the project. We will also be providing releases to local, state and federal agencies, as well as relevant non-profits.

School Projects Participatory outreach is generally the most effective form of outreach.We partner with public and private secondary school, as well as OSU and local community colleges to develop and install portions of the project. These partnerships not only provide important work to be completed for the project, but eduate the students, faculty and parents about water conservation techniques.

Web-Based Outreach Information about the project will be posted on this website, as well as on the First Alternative Natural Foods Co-op website. Other non-profits and government agencies will be requested to link to this website for Water Conservation resources. Videos will be produced that can be linked to from both of these websites.
Interpretive Displays and Murals Interpretive displays, funded by the League of Women Voters of Corvallis will be installed throughout the South Co-op site, showing how water is conserved. Two large murals designed, painted and installed by the Waldorf School of  Corvallis cover two 3,000 gallon rain collection tanks. The Murals depict the two water sources of Corvallis and their contributing mountains. They are the Willamette River and Rock Creek with the Cascades and Marys Peak respectively.
Classes and Tours Beginning on April 22, 2011, Earth Day, both public and privately organized tours will be provided on a schedule at the Co-op.
Partnerships We currently partner with the City of Corvallis, the League of Women Voters of Corvallis, OSU Schools of Mechanical Engineering and Horticulture, The Waldorf School of Corvallis, Lane Community College, JTI Supply,  Green Currents and Element Graphics. If your organization would like to be a partner on this project, click here.

How You Can Help

Join the Water Action Team to design, install or promote the project.

Contact the Water Action Team. Let us know which portion of our project that inspires you the most.

Primary funding for the Three Waters Project has come from the City of Corvallis and The First Alternative Natural Foods Co-op.

The City provided a $30,000 grant from equal $10,000 contributions from Tap Water, Waste Water and Stormwater Fee Programs. No tax dollars were spent on this project. Terms of the grant require:

The First Alternative Natural Foods Co-op provided $20,000 from their annual Capital Improvement Fund. They also provide up to $10,000 worth of marketing assistance to provide outreach for the project.

The League of Women Voters of Corvallis provided $2,500 for the design and production of interpretive displays.

VISION: Water conservation efforts decrease the amount of water city residents use, and our creeks are clean and clear.

Action teams are groups of volunteers working together on projects.